As ya'll know by now, I love words. I frequently post lists of obscure words (like here, here and here) and, not long ago, I posted a list of words we might have been using if William the Conqueror hadn't conquered (the list is here).

I also love cartoons and if you put the two together you get strips, comics and graphic novels. Mort Walker was one of the great strip cartoon artists, most famous for his Beetle Bailey character. 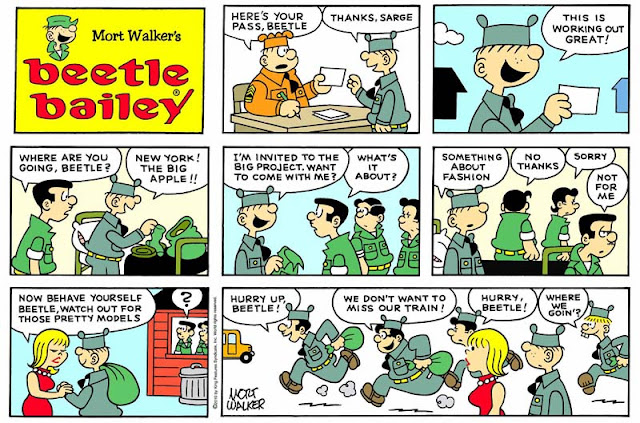 But Walker was also a great teacher of the art of cartooning and someone who loved to play with language. In 1980, he wrote a deliciously tongue-in-cheek book called The Lexicon of Comicana in which he created names and bogus origins for all of the little graphic effects that cartoonists use in their work. Take, for example, the final panel in the strip above; the little clouds under the running soldiers are there to indicate movement. Walker called them briffits.

Here are some others:

Agitrons: wiggly lines around a shaking object or character.

Dites: diagonal, straight lines drawn across flat, clear and reflective surfaces, such as windows and mirrors.

Hites: horizontal straight lines trailing after something moving with great speed; or, drawn on something indicating reflectivity (puddle, glass, mirror).

Indotherm: wavy, rising lines used to represent steam or heat; when the same shape is used to denote smell, it is called a wafteron.

Lucaflect: a shiny spot on a surface of something, depicted as a four-paned window shape.

Solrads: radiating lines drawn from something luminous like a lightbulb or the sun.

Every artist should have a copy and, I'm delighted to say, it's still in print. The book is brilliant and has been a constant joy to me since I first got my copy in 1985 in a now long-gone bookshop in London called Dark they Were and Golden-Eyed.

Add some lapsebeams around me.