The first physical copies of The Diabolical Club arrived this week, which is fantastic. The three things that always get me revved up are (1) seeing the physical book for the first time, (2) seeing it in a bookshop, and (3) seeing someone reading it. All very exciting!

The books are printed by a long-established company called Clays from Bungay in Suffolk and, as I saw the name on the outside of the delivery box, something began tickling at the back of my memory. Isn't Bungay one of the places where they still play Dwile Flonking? And wasn't Clays involved in some way? 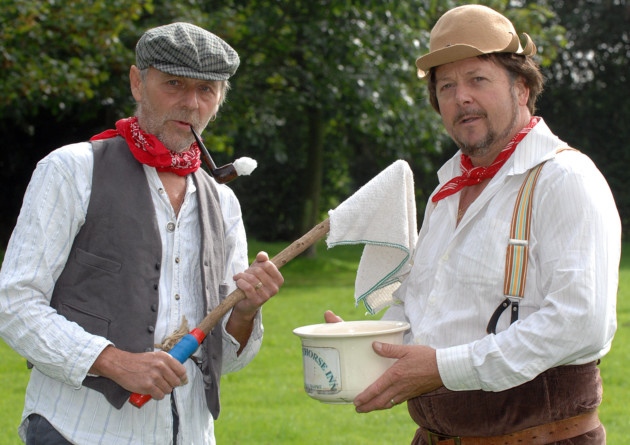 Dwile Flonking is an East Anglian 'sport' which some people would have you believe is centuries old. In fact, it's only around 50 years old but it may be a revival of some old harvest ritual. The modern game is believed to have been created in the 1960s by rival printing apprentices at Clowes of Beccles and Clays of Bungay.

At Midday the two teams assemble - usually in a pub garden -  and dressed as yokels. The referee, or Jobanowl, decides which team goes first by throwing up a sugar beet. The teams then become either Flonkers or Girters. Girters form a circle by holding hands and they surround the first Flonker in to 'bat'. The Flonker holds a short pole called a Driveller and uses it to pick up the Dwile - a soaked bar towel - from a chamber pot full of beer that stands in the centre of the circle. Upon the command of  'Here y'go t'gither!' the Girters start to dance around anti-clockwise while the Flonker goes clockwise around the chamber pot and attempts to 'Flonk' the Dwile at one of the Girters. 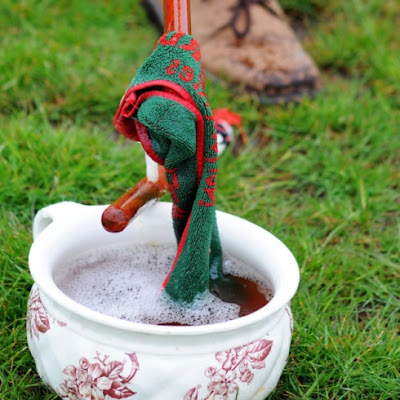 A direct hit on a Girter's head is called a Wanton and scores three points. A hit on the body is called a Marther and is worth two points. A leg hit is a Ripper and scores just one point. If the Flonker misses all of the Girters it's called a Swodger. The Girters then form a straight line and the outgoing player must down a pint of ale in a quicker time than it takes for the Dwile to be handed down the line of Girters. If they can't do it, they're out and the next Flonker comes in. This continues until the whole team is out. Then the teams swap over. Once everyone has Flonked the winning team is decided on points. 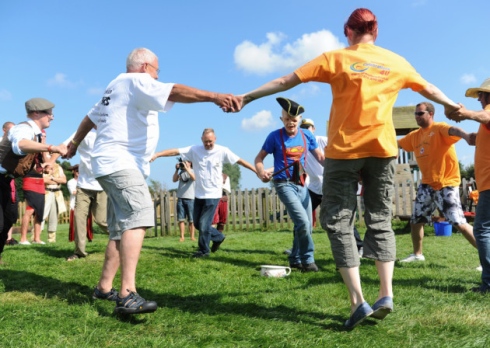 Unsurprisingly, many of the players end up riotously drunk, falls are common and there are occasional casualties as the result of a good hard Wanton. Which is why the sport has been banned on several occasions for violating health and safety regulations. But it continues to persist and, if anything, trying to ban it just makes the British want to play it even more. We love being the underdog fighting against authority. We love people like Eddie the Eagle more than we love the actual champion. It's no wonder that many of our folk heroes are criminals: Robin Hood (armed robber), Rob Roy (armed robber), Dick Turpin (armed robber), and Guy Fawkes (terrorist). They all stuck it to 'the man'.

That says so much about the British character doesn't it? It's why attempts to ban cheese rolling at Cooper's Hill in Gloucestershire have failed (people held the race in secret at night with the potential for greater injuries). It's also why we play River Football in Bourton-On-The Water, and go Bog Snorkelling in Llanwrtyd Wells. It's why the Haxey Hood takes place in Lincolnshire, and Shin Kicking in Lancashire, and Cornish Hurling in St Ives and St Columb Major; a sport so violent that it  had to introduce a single rule - No Weapons.

It's all a bit of nonsense though, isn't it? Maybe not. I say that we should be embracing these silly sports because they're traditions worth keeping. And besides, in a curious way, they led to the modern Olympics. 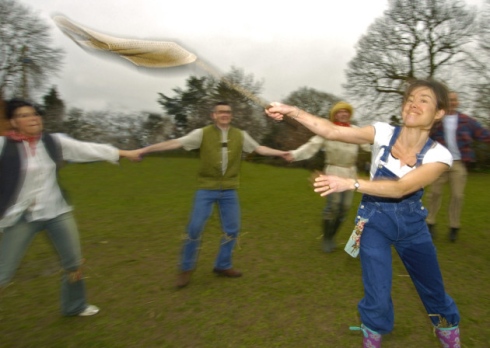 The Cotswold Olympicks - inspired by the Olympic events of Ancient Greece - were first held in 1612 on Dover's Hill, Chipping Camden, and survived until 1652 when the Puritans shut it down. It featured Shin-Kicking, Tug Of War, Sack Races, Sheaf Throwing (lobbing a hay bale as far as you can with a pitchfork), Climbing a Greasy Pole, Morris Dancing and Back Swording (or 'Cudgel Play) in which contestants keep hitting each other until one is unconscious. The Olympicks returned after the Restoration and continued for another 200 years before being, once again, shut down by the authorities. But, by then, the event had inspired Dr William Penny Brookes to create the Wenlock Games at Much Wenlock, Shropshire in 1850. And it is these games that directly inspired the creation of the modern Olympics in 1896. That's why, for the 2012 London Olympics, our bizarre cyclopean mascots were called Wenlock and Mandeville (the latter named after Stoke Mandeville Hospital in Buckinghamshire where the Paralympics were created).

So there you go. The British may like a daft sport or two but who knows where a silly idea might take you? It might take you all the way to a gold medal.

Photos taken from the Beccles and Bungay Journal