I often hear the question posed: 'How come Australia has so many of the world's most venomous creatures living there?'

It is true that Oz seems to have more than its fair share of bitey and stabby nasties: They have funnel-web and redback spiders, blue-ringed octopus, death adders, tiger snakes and taipans. The most venomous sea snake - Belcher's - lives in the seas around Australia, as do the stone fish and box jellyfish, and even the platypus has venom in its cockspur-like rear claws.

But why do they need to carry so much poison?

The answer often suggested is that creatures developed venom to counter the threat posed by predatory creatures that no longer exist - the extinct so-called Australian megafauna. So let's look at that theory for a moment. Firstly, what kinds of creatures were the megafauna?

When I was at school I clearly remember learning all about mammoths, woolly rhinos, mastadons, sabre-toothed cats and other big extinct mammals like Brontotherium, giant ground sloths and the staggeringly massive Paraceratherium (seen here in comparison with a modern African elephant).

But I don't recall being told about the big animals in the southern hemisphere except, maybe, giant carnivorous birds like the Moa and Aepyornis. I was robbed!

Austrailia had some amazing prehistoric giants ... and I am pretty sure that many of you will have never heard of them either. Let me point out a few stars (we'll start small and work up): Say hello to Zaglossus hacketti. 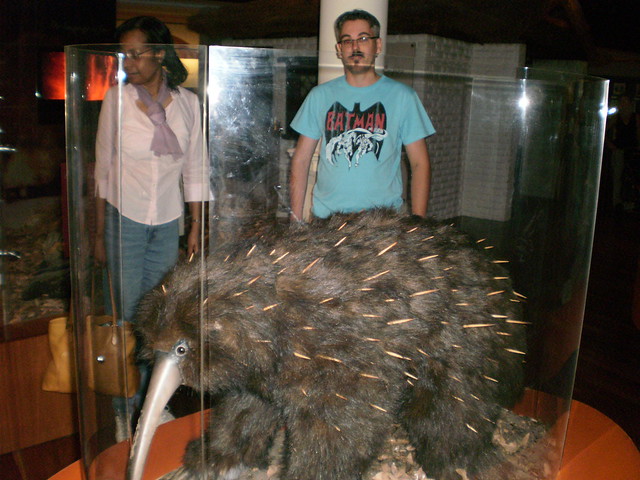 This was an echidna, an egg-laying spiny anteater, the size of a sheep. There was also a type of platypus called Obdurodon dicksoni that was twice the size of its surviving cousin.

The largest fossil marsupial found to date is the mega-wombat Diprotodon optatum that grew to at least three metres long, two metres high at the shoulder and weighed up to two tonnes. 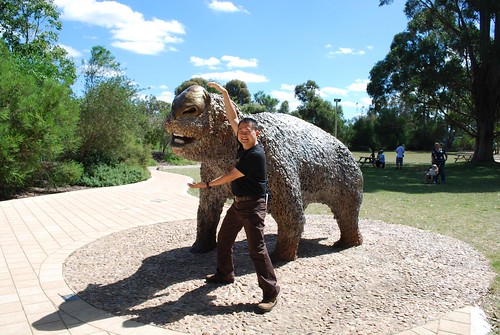 This whopping great feller below was called Procoptodon goliah, a type of short-faced kangaroo that grew 2–3 metres (7–10 feet) tall, and weighed up to 230 kilograms. Procoptodon has become better known in recent years after the character of Raz appeared in the film Ice Age: Continental Drift. Related to the kangaroos but quite different in form was the curious-looking Palorchestes azael, a tapir-nosed, heavily clawed creature the size of a cow. You wouldn't want to laugh at it to its face. 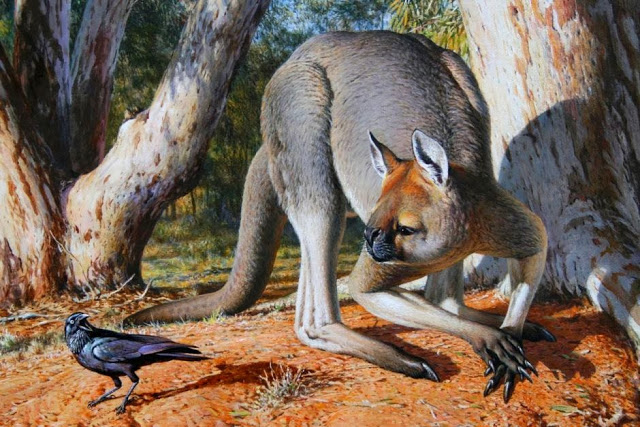 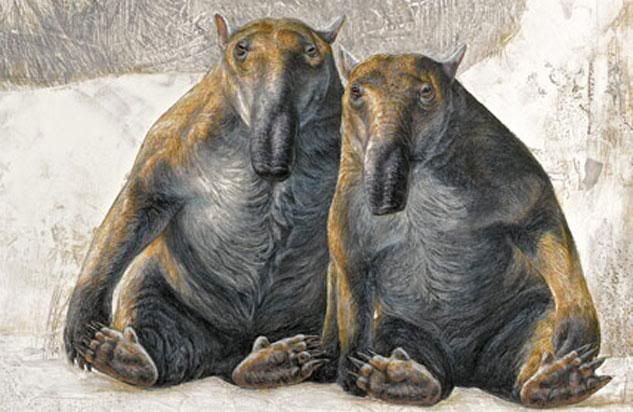 Pushing the slider up the dangerous scale we come to Thylacoleo carnifex, the so-called 'marsupial lion', that was the size of a modern leopard. Although totally unrelated, its skull is remarkably cat-like and boasts large slicing pre-molars. It had a retractable thumb-claw and massive forelimbs. It was almost certainly carnivorous and, bizarrely, lived in the trees. 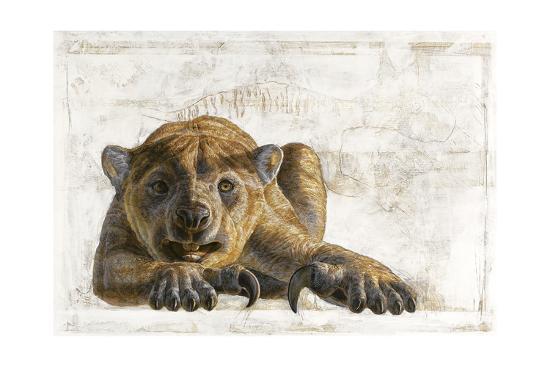 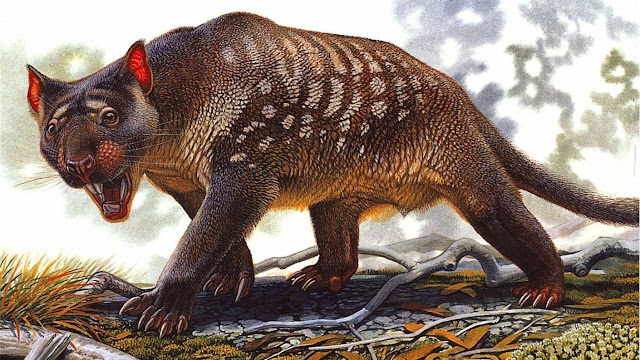 Finally, we come to the real monsters. Top of the Australian food chain was a host of terrifying, large, flightless birds including the largest - Dromornis stirtoni, (Stirton's thunder bird) that stood three metres tall and weighed about 500 kilograms - and my personal favourite, Bullockornis planei, nicknamed the 'Demon Duck of Doom'. 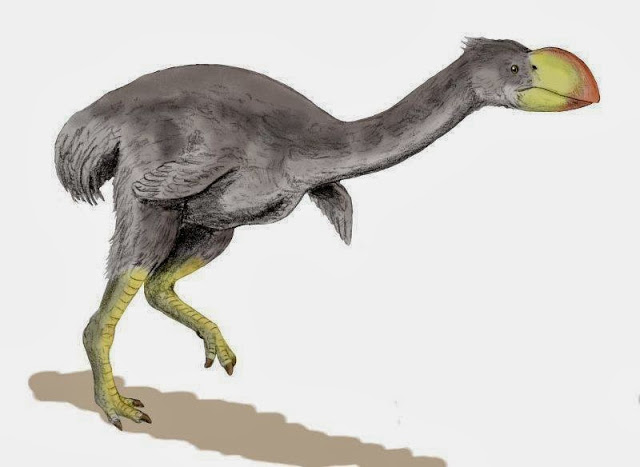 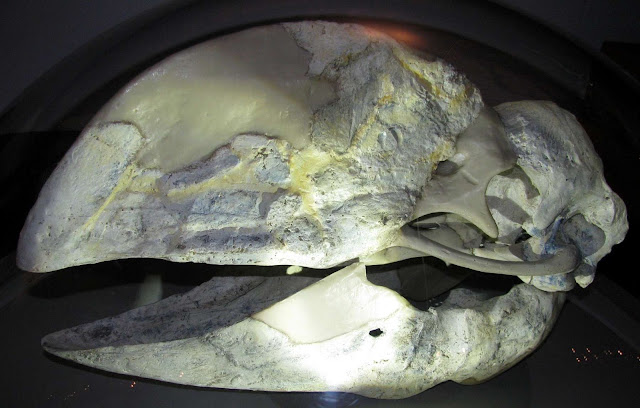 This was a carnivorous, predatory bird related to modern ducks and geese, that had a skull bigger than a horse's. Wow. The only animals that could compete with the birds were the reptiles, such as the 7 metre (23 feet) long goana lizard Varanus priscus, the 7 metre long crocodile Quinkaka, a genus of land turtle called Meiolania measuring 2.5 metres (8 feet) in length, and a 10 metre long hunting snake called Liasis. 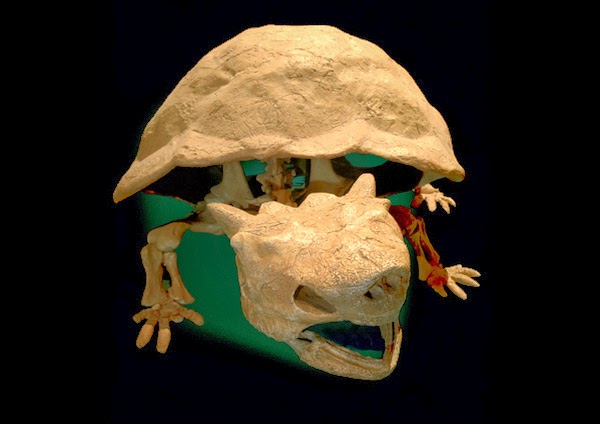 Amazing aren't they? However, no Australian fossil animals are anywhere near as big as the fossil animals found elsewhere. So is it really a strong argument to say that the large number of highly venomous Oz animals evolved because of megafauna?

One competing theory claims that it's actually due to Australia's physical isolation. Any isolated community will develop a unique flora and fauna. So maybe somewhere along the evolutionary time line, the tactical use of venom took precedence over the use of strength and speed. While animals elsewhere in the world became bigger, stronger and/or faster, Australian animals were developing techniques which allowed them to hunt effectively while remaining small in size.

Another theory claims that it's due to climate. Many Australian venomous animals are cold-blooded and live in desert or grassland areas. They are at the mercy of the continent's frequent droughts; some areas often go months or years without decent rainfall. This means that prey animals become scarce so, if a carnivorous animal misses an opportunity to feed, it may be the last chance they ever have (even though many cold-blooded animals can live for long periods between meals). By using venom that quite often contains paralysing toxins, the hunter will usually only need to get one good bite or sting to fell its prey. Consequently, the energy spent on producing venom is economically well-spent.

We should also consider the fact that referring to these animals as 'highly venomous' is somewhat anthropocentric. While their venom can kill us or make us very ill, it often has a much less potent effect on other species that have evolved alongside them in the same ecosystem. Humans have only been on Australian soil for a short blip of geological history after all.

So it seems, after some research, that there's no single definite answer to the question but plenty of sensible, well-argued possible answers. It's probably a combination of several factors, including the megafauna.

As for me? I just wish the Demon Duck of Doom were still around.

The Trickiest Question To Answer

'Where do you get your ideas from?'

It’s a question all writers get asked. And it's almost impossible to answer.

People want there to be a single, simple answer. But there isn't.

Successful authors have a particularly tough time of it as they get asked hundreds of times a year. Stephen King, in a Q&A for The Write Channel, said:

‘I can tell you about fifty percent of the time where I got the idea. And the rest of it is totally like getting an idea in a dream and I can’t really remember where they came from.’

'I make them up. Out of my head. And, surprisingly, people didn’t like to hear that. They look unhappy, as if I'm trying to slip a fast one past them, as if there's a huge secret, and, for reasons of my own, I'm not telling them how it's done. Ideas come from all over the place. You get ideas from daydreaming. You get ideas from being bored. You get ideas all the time. The only difference between writers and other people is we notice when we're doing it.'

My next novel The Diabolical Club is published in July. And I'll be attending a few literary festivals and book events closer to the time. And I'm sure to be asked the same question. But this year I'll at least have a few examples to share of the sorts of places that ideas come from.

Every subscriber to the book (See here), will be getting an additional free e-book of short stories featuring characters from my little universe of South Herewardshire. It's called The Nearly Invisible Man and Other Stories and I can tell you exactly what the spark was that ignited most of stories.

One was inspired by a very surreal pub quiz that I once attended in Lancashire. Another grew out of an article I read about a hacker who’d upset a great many Americans by gaining access to their Bluetooth sex toys. And yet another came from me pondering the question of how fat a person would have to be to be bullet-proof (and how far I was off the target!). That story proved to be quite fascinating to research and led me to discover this extraordinary photo. 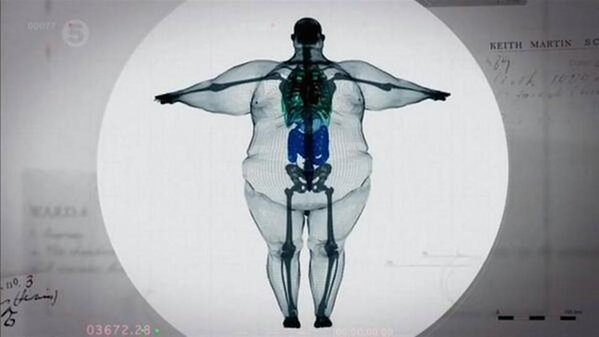 Which just goes to show that, inside, we're all the same.

I also found an episode of TV show Mythbusters where Adam Savage and Jamie Hyneman did a series of tests using mannequins and ballistics gel to discover what depth of fat would be needed to stop a bullet before it reached any major organs.

A single idea can lead you to all kinds of amazing facts and some great stories.

But, as I said at the start, half the time ideas come out of absolutely nowhere and there's no simple, easy answer to the question.

I'll leave you with this great interview with Neil Gaiman. Enjoy.