I was rummaging through some old boxes of knick-knacks and gewgaws recently and discovered this - a crime report taken by my late father in 1967. This is the same Dad whose incomplete murder mystery novel I've included parts of in A Murder To Die For.

Dad initially joined the Met in London in 1959 but became homesick very quickly and transferred home to what was then the Cornwall Constabulary. It eventually amalgamated with the Devon and Exeter Constabulary and the City of Plymouth Police in 1969 to become the Devon and Cornwall Constabulary; which is why, I assume, the report was taken on Devon notepaper even though Dad was never posted outside of Cornwall. I guess they were using up old stocks of forms. 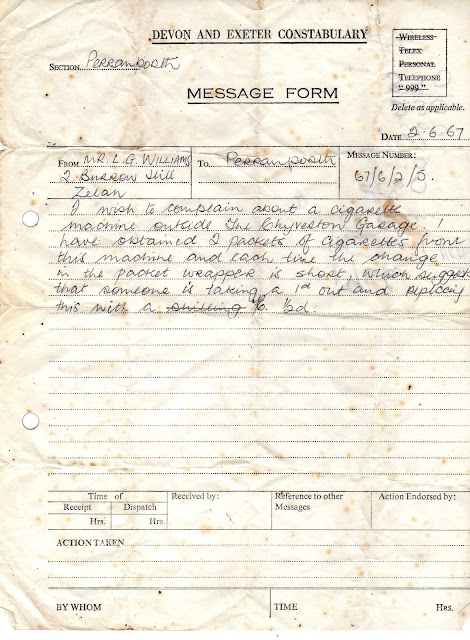 The photo does get a bit bigger if you click on the image but, if you still can't read the body of the report, here's what it says:

'I wish to complain about a cigarette machine outside the Chyveston Garage. I have obtained two packets of cigarettes from this machine and each time the change in the packet wrapper is short, which suggests that someone is taking a 1d out replacing this with a 1/2d.'

If you're a mere stripling or a chit of a girl/boy you may not remember that cigarettes were once both fashionable and affordable and you could buy 20 fags for around 20p in 1967. Or, rather, four shillings which equated to 20p back then. But discounted ciggies cost slightly less - in this instance 3s/11d so the manufacturers put a penny change inside the cellophane wrapper. How the alleged criminal got the packet of ciggies out of the machine, got the penny out of the cellophane, replaced it with a ha'penny, and then put the packet back inside the machine is a mystery.

I suspect that cigarette prices had gone up half a penny and taken the angry Mr L G Williams of Zelah by surprise. Otherwise, why stop at fleecing people of a mere ha'penny? If you have that much access to the machine JUST NICK THE FAGS AND SELL THEM.

When this incident happened my dad was a community bobby, riding around the local area on his police bike. We lived in the police station at Blackwater, near Truro. Well, a bungalow with an office attached that served as the local police station. 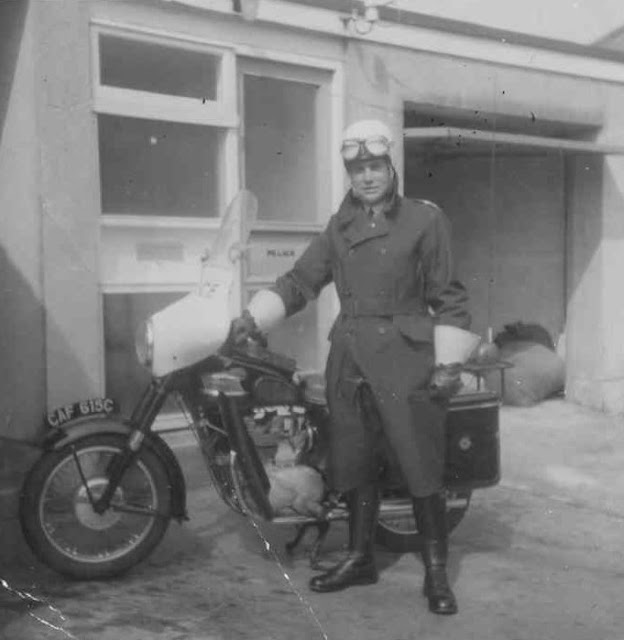 And I rode a police bike too. You can see me here on the right. 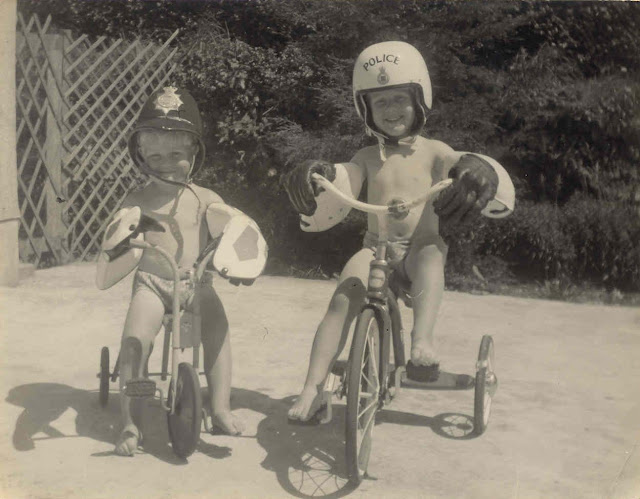 Erm ... if you're old enough to remember the TV series CHiPs of course.